The story goes that not until her Yamaha XT500 broke down on some forgotten German highway more than twenty-five years ago that a, then, teen-aged Jennifer Bromme was completely unaware of her proclivity for working on motorcycles.  If you ask the prime mover of San Francisco’s only woman owned and operated, independent motorcycle shop about this story she will describe that her aptitude for bikes as coming to her “easily”. However, her father may have something else to say about that.  Especially after the fledgling mechanic nearly destroyed her families kitchen when she got it in her head to use her father’s oven as the proper way to heat up her engine crankcase in order to perform some repairs.  The good news: she was able to split the case and save the bike.  The bad news: it was time to enter into a three year apprenticeship in Germany under the cruel tutelage of some seriously old-world mechanics.

It was during this time that Jennifer’s skill set grew and her experiences became wide and varied.  During her time as an apprentice there is not many brands or models of motorcycles she didn’t work on.  Able to preform many repairs without the aid of machines and seeing the disparity other people had when it came to doing the job right she sought to move on from her apprenticeship and go into business for herself.

In 1994 she officially opened DIE WERKSTATT for business.  Working out of a communal warehouse space, Jennifer Bromme quickly made a name for herself.

After developing a dedicated clientele she made a name for herself through her thorough work.  The shop moved to a new location on Harrison and Jennifer took her mechanical abilities to a new level where she formed a racing group and started to take her know-how to the track.

After years of providing the bay area with unparalleled service Werkstatt expanded.  It moved to it’s location at 3248 17th street at the corner of Capp st. in San Francisco’s historical mission district.

In 2016 Jennifer changed the operation to teaching motorcyclists to learn how to work on their own bikes, a passion she had for years but wasn’t able to pursue because of the demands of running a business. 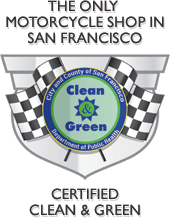 Call for other tires/sizes! All our tires are competitively priced!